Note from FreewareFiles: The developer requires you to register with them before downloading. The download link provided will redirect you to their site. Registration is free. Pros: Easy to use.

Cons: Can be slow at times. Other Thoughts: This software comes closer to actually sculpting with clay than any other software I've found. Sculptris is a free, 3D digital sculpting program. Sculptris is small and focused at its main task, which is sculpting and painting models. This is made possible in Sculptris by its amazing ability to locally redefine the internal structure of the model. In Sculpt mode, you can edit the mesh geometry with simple brush strokes. Think of this like using sculpting tools on a lump of real-world clay.

In Paint mode, you can use brushes to paint a texture that is wrapped also known as mapped onto the surface of your mesh. Sculptris has been designed to be as accessible as possible to every type of artist. The interface is effortless to navigate and each feature is easy to locate. Even the most novice user is able to start creating within moments. As you become more skilled, you will begin to discover new depths within the application. Your sculpts will be taken to new levels of creativity and detail the more experienced you become.

The product offers two navigation methods to accommodate your preferences and what you're already used to. Alternatively, the app's Original Navigation and hotkeys can be toggled on or off. The app frees you from the need to worry about your model's geometry. As you model, the tool is constantly analyzing the surface to ensure that there are enough triangles to display the details that you're creating.

Another problem is that many objects are self-overlapping, like a human figure for instance. You can have an arm crossing over a torso with no given seam between their surfaces, so it gets a bit inconvenient to split it into two layers, since you'll probably want to paint freely over the non-contour seam at some point. I've considered some kind of quick-masking using a magnetic "lasso" tool, where you could temporarily mask out a region and choose to paint inside or outside it.

A related feature that needs some more pondering is locking one layer to the transparency of another, so you can have multiple layers of "texture" on top of an object, and paint on any of those layers without worrying about the object edges. When I eventually add layer movement, such layers would preferably move together, so I suppose it should be considered a kind of general grouping. September 14, Protoshop has some new features. I've also added a little discussion on the color blending stuff, along with example images.

September 12, Protoshop is all I do these days, it seems. Some of the most interesting new features are bit color channels, channel transparency lock and really interesting internal color representation.

Basically I've played around with non-linear color spaces by shaping the RGB channels, and it leads to very cool blending properties for when you have any kind of transparency like semi-opaque layers or just a simple brush stroke. It's even possible to get convincing high dynamic range effects. I'll put up some illustrative images later. September 8, Paint app update. It now has layers - wohoo! Spent like 6 hours yesterday beating myself up over how to properly merge two alpha-blended layers Came up with a formula late that night which turned out to be correct, but a different pointer bug prevented the image results from showing up accurately, so it took another good bashing today before everything was settled.

The blending code has grown increasingly horrible due to being prematurely optimized and hardcoded into specific functions for every blending operation. 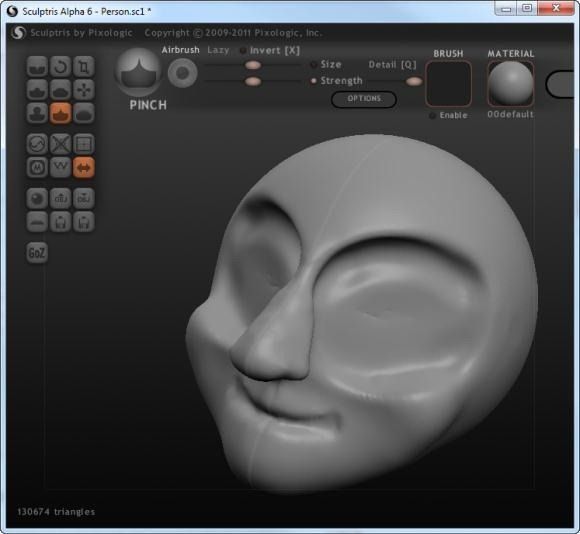 I'm going to try making some nice overloaded operators now to get convenient vector operations for everything. September 7, Started working on a cute little paint app earlier this week, and it's starting to become useful now. It's mainly focused on streamlined painting and sketching, with some possibilities for pixeling as well.

Will most certainly be updating this one in the near future. September 4, Fixed a few musagi issues and upped the version number a little bit again.


Most important addition is that you can now change the audio latency to find a good setting for your system. If the old versions resulted in crackling sound or were misbehaving in some other way, you might have better luck with this one. August 29, Through an unexpected hyperburst of coding stamina, I've made months' worth of progress in musagi over the last few days. And though it's not at 1. There are several noteworthy bugfixes, plus many cool new features. I suggest everyone go grab a copy right now.

The changelog has more details regarding specific features and fixes. Here are two mp3's demonstrating some capabilities of a new instrument I added: operator-sid. I've fixed a bug that's been eating me for some time, and which should finally enable people with two-button mice to edit note slides. Other highlights include ugly pixel-doubling for people with too much resolution and a slightly more compact interface for those with too little.

Basically I've added a palette image into the already present skin directory, and there will also be a button for switching themes at run-time What remains to be done is figuring out which colors I can rearrange to make the appearance more flexible, since right now I'm reusing a lot of palette entries for completely unrelated elements and that means you can't really change them all that much before things start looking very random.

The choice of circuitry wasn't ideal, but at least it works and will do just fine for now. When it comes to retro gaming it's much better than my otherwise great xbox controller, and there's obviously nothing above it for good old NES emulation. August 19, Celebrating three months of inactivity with this little update. During summer I've done some work on the racing game , adding a proper track and tweaking controls to make it more comfortable to drive.

I also made a new video clip showing the latest placeholder graphics I still need to sort out a few issues with the simulation before I feel prepared to upload a public test version, and obviously it won't be much to look at for a long while still, as I won't focus on the graphics until I'm happy with how it moves. May 19, Oh look! I made a game! Go check it out, it's kind of epic May 10, Finally got around to uploading the sound article. I started work on that two weeks ago, but dropped the ball after an initial burst of drafting.

Have a peek if you'd like to learn some stuff about basic sound theory. I might expand on it later, and maybe rewrite parts. Feedback would be useful. April 28, Spent this day with musagi. Made some changes and additions to the interface, hoping to make it a bit more friendly and accessible. There's also a changelog file available from now on that is meant to record any significant progress and new features. Check it out on the project page linked above. April 27, For some reason I got a relatively sudden urge to play with desktop video capture earlier this week.

I guess at the back of my head was always the idea of doing tutorial videos for musagi, and it seems that will be quite feasible using this thing. I added capture and display of keyboard and mouse input so it would be easier to follow what's going on and learn from it. The first test video is up on youtube: watch I will try adding text captions and zoom later so it'll be possible to make more involved tutorials.

There will probably be a project page on this as well April 20, Made a quick little update to smuplay, adding support for recent changes in the musagi song format. Get it over at the project page for musagi or directly here: smuplay. I'm currently working rather slowly and distractedly on an LD entry that is mostly just an excuse for experimenting with the PSD-as-level concept. Yesterday I added simple rectangle-against-bitmap collisions and today I hope to make it into some kind of basic platformer.

Theme score will be minimal, as per tradition. April 12, Rather quiet around here.

It's partly because I'm busy. Busy mainly with a new attempt at the racing game. There's a small video available, but it's not much to see yet. I'm having trouble with a few details, but there's some hope that they'll be sorted out in a week or less. Only reason I'm making it available at this point is that I might want to use it in the upcoming Ludum Dare competition which takes place next week.

The rules state that only publicly available code may be used for competition entries. What's interesting about this code is that it allows you to extract each layer as a separate image, rather than loading the entire thing as a flat picture. I'm thinking of using it for painting levels directly in Photoshop. It only supports regular RGB-format images though. Transparency in actual layers is ok, but no explicit alpha channels or other tricks.

Get it here: psdimage. Done some minor bug fixes on musagi. Also added a bunch of random instruments and a new song to the zip, so you might want to go download and play around a bit. March 3, I'll be away for a week or two, and won't be able to update the site until I get back. At least one new project is waiting for proper coverage, but some teaser images will have to suffice for now: pic1 pic2 pic3 I know these links are dead now, but I don't know where to find the original images!

There's a small chance I might be scribbling at bits of article material while I'm gone. Need to fill that section out with something. Nitro Butts is an old game from that I'm almost embarrassed that I haven't released earlier. A joint effort between me and my brother. February 25, Asteroids! February 19, Two more, again - animape and Lurch February 12, Two more old projects are up - fftuner and raytracers.

Page update date fixed. The date shown at the bottom should reflect change date of the particular page you're viewing. I also removed the RSS feed since it was broken somehow, causing refresh on the aggregator s despite no updated content from me. Will look for a different feed creator. February 3, Added four projects from last year. February 1, Site is up and seems to be running ok.