Now I find that I can no longer add any new data. I can add the data but the program does not retain it. Is there any help available? In the old program, after entering any new data, one could hit a SAVE button to save new data. In the newer program that feature is not there and any new data entered is not saved. It is far the best program for Macs, and I always regret that there is no version for all the people using PCs. Working with genealogy programs for more than 15 years now, I started with Reunion, tried others over the years including FTM and Ahnenblatt while using a WIndows-based laptop, but always returned to Reunion again: it is easy even for beginners, you can customize a lot of entries just the way you like it, has lots of ways to generate charts and reports just the way you want them, is always upgraded without problems, and you have a very fine website with only some clicks.

The help functions are easy to understand, and if ever there is a problem you can rely on the very capable report. This is by far the BEST genealogy software on the market today!!! I have been using and upgrading for many many years.


Leister support is also wonderful, but frankly their manual and FAQs answers most of my questions. The instructions are well written and gives tips and tricks not previously known. I find it robust and easy to use. The chart outputs work well. I have been using Reunion since Version 3. It is so easy to use. I like the ability to set references and reuse them without having to type all the details each time.

They can be tweaked as necessary with new information. Searching specific individuals is very quick using the family name. Creating trees in a chosen format allows good visuals. Great support if you strike a snag. Nice program. Fairly easy to use, produces the usual reports and websites. Fabulous support by Leister. I had year of work done in Generations, a Windows port of a very old version of Reunion that was abandoned. No other package could properly convert my existing file.

Leister helped me do it perfectly. Entering data shows off how old the UI is, you type in name and have to go to a new screen for birth and death date entry. Very little of the usual top-of-screen menu bar does anything. Made worse by recent additions for photos, multi-media, etc. Very Macintosh design concepts. A bit pricey to stay current. They dropped functions that I used a lot when making handwritten notes in libraries or courthouses. I switched to Legacy from Family Tree Maker over 15 years ago and have sampled a couple other programs, before I made the switch.

I especially like the Facebook group…. You can read the manual, but reading how others use certain fields or reading what how they want to input something is fascinating as I keep learning more and more about this program and how to use it! I am using Reunion 12 and like it very much.

Poll: What genealogy software do you use?

I only got my first Mac about 5 years ago. Before that I was a PC user since It seems to be most popular and Bruce Buzbee, the creator, is quite accessible. All are similar to cars though. The steering wheel is always in the same place; windows sit atop doors. The trunk is in the back and they all have four wheels. It boils down to brand loyalty or which style and color pleases you the most.

I am presently looking at RootsFinder put out by Dallan Quass and others. He also was founder of WeRelate. I tried it but never quite got it even though I liked the concept. About was my favorite FTM.

I use Family Tree Maker and am pretty happy with it. I used FTM because I can sync it with my ancestry tree. I used it from the beginning and bought the 17 version last year at RootsTech. There was a delay in delivery which made me ab bit nervous, but they really worked hard on their release. Everything works now and am loving it!

I have been going back and forth between Reunion and RootsMagic for years.

Subsequent synchs of updates sent the attached files with no way to prevent it unless I made each one private. I only have rights for personal use of some of these files — commercial use is prohibited. Started with My Heritage because it allows the import and export of Spreadsheet Files. Ben a problem with it recently because it no longer updates Marriage Files via the spreadsheet. Main info is kept in a spreadsheet. I started with Ancestral Quest and was too deep in it to switch later. If I had it to do over, I might have started with Legacy, Their webinars are invaluable and their database is superb — although with a bit of a steep learning curve.

Note on my test GEDCOM file: This is a small file containing 7 people, 3 marriages including 1 to a non-existent spouse , 1 adoption, 2 media files, and 2 sources including one using a template. However, I used every available field in FTM, including at least 1 of every kind of note field. Keith has been interested in family history and genealogy ever since his grandmother convinced him they were descended from one of the signers of the Declaration of Independence alas, it wasn't true. He's worked on it seriously since about He's also a technophile and has always tried to make his job or life easier by using technology.

So of course he's interested in the intersection of technology and genealogy. He loves to try out new software, mostly for the Mac, but will stoop to firing up Windows on his Mac, as well. The basics, such as all the people, names, dates, places, links parents to children, spouses, etc. A big part of the problem is that Reunion does not support images that are attached to individual citations. 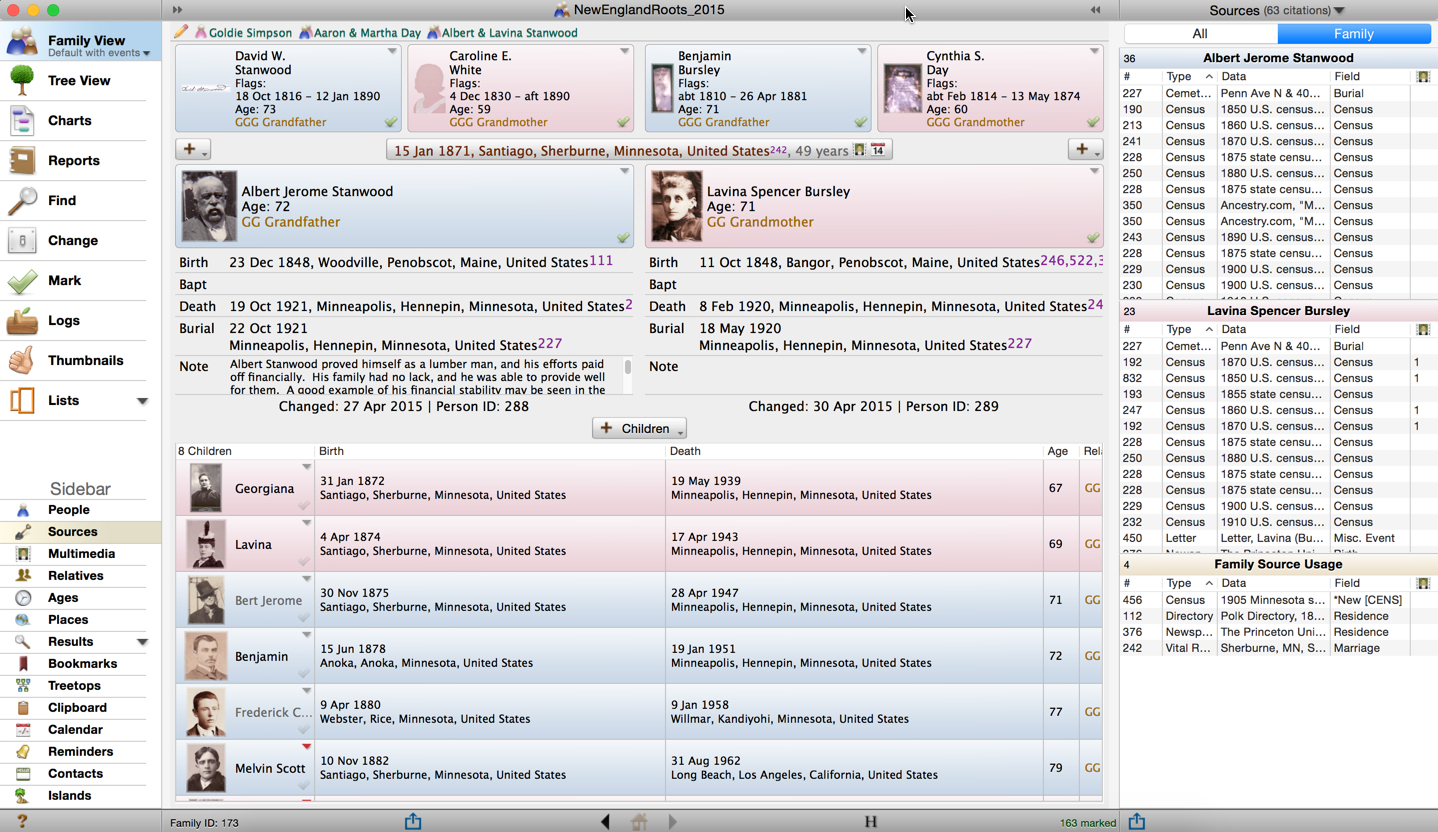 The workaround is to create a separate source for each source image. Right now their only solution if, like me, you get a mess, is to have you send them your gedcom and they will import it for you. But, again, you still have only the options from the previous paragraph.

I would like to go back to Reunion. I otherwise love the application. I used it for all my research for over a decade. But this is a deal breaker for me. If, like me, you are interested in returning, I would encourage you to let them know you would like the ability to associate images with source citations. They talk about some changes about linking media to source. Tom, thanks for pointing us to that discussion.

If Leister Pro really wanted to pick up some former FTM users, they would change Reunion accordingly instead of jury-rigging it to move all citation media to the corresponding sources. Now comes Ancestry and collapses my carefully worked FTM files. If I understand you correctly, the leading number is just a piece of text before the title. Reunion may not sort the sources in this order automatically, but I would think that you could sort on Title and get them in the order you want.

I may be way off base in this, but it seems somewhat logical now that you have me thinking that the titles are TEXT and not numbered Media. Your thoughts? Bob, you are correct, the Title of a source is just a plain text field. For example, S1 could be the number for a source record, M1 for a media record, etc. If everything but sources is imported correctly, then what I would need to do is to re-align my source numbers in the new REUNION file and change my master file to the new numbers. The file is labeled 5. I decided to use my older Reunion 9 and imported directly from Ancestry a small family group.

What a mess. No facts, notes, or images of any kind. Many sources listed multiple times per person. Citations seemed to be there in a form I wanted.

It feels almost like starting over. Glad I tried it though and now I need to further educate myself as to work arounds. Perhaps another program would be better. Thanks for all these posts as they are extremely helpful. Ancestry is supposedly looking into this, which would be a real boon to many users.

RootsMagic does a fairly good job of importing, but I have concerns about how it exports sources. Sorry, yes a gedcom file. In Reunion when I click on a name there are tabs for Facts and Notes. Facts such as employment, marriages, military etc are not there. Notes are blank as well. My main data bank is still hard copy. I too hope for a better program than Reunion as I find it awkward to use again. Pricey too but prior uses at least get a price break for an upgrade to the most recent version.

Thanks Keith. While not directly about importing from FTM, I had a similar problem about 15 years ago when Sierra abandoned their Generations packages. Apparently Generations was a Windows port of a very early version of Reunion. I tried a number of other Windows genealogy programs and had a terrible time with the import. About 4 years ago, a work requirement made me get a MacBook Pro. So I picked up a copy of Reunion for the Mac. The converted everything perfectly.